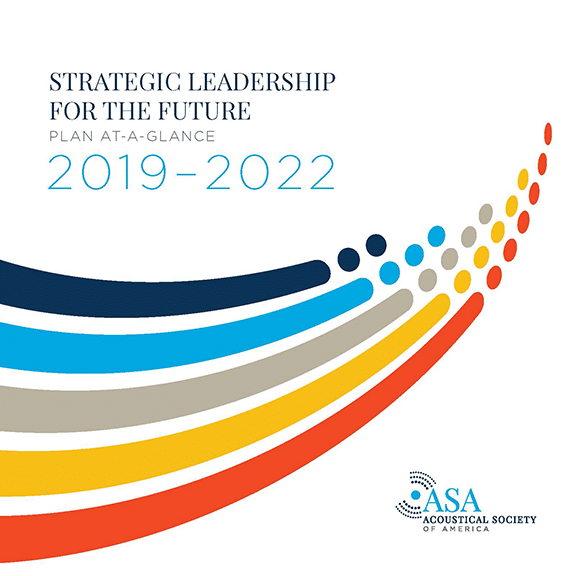 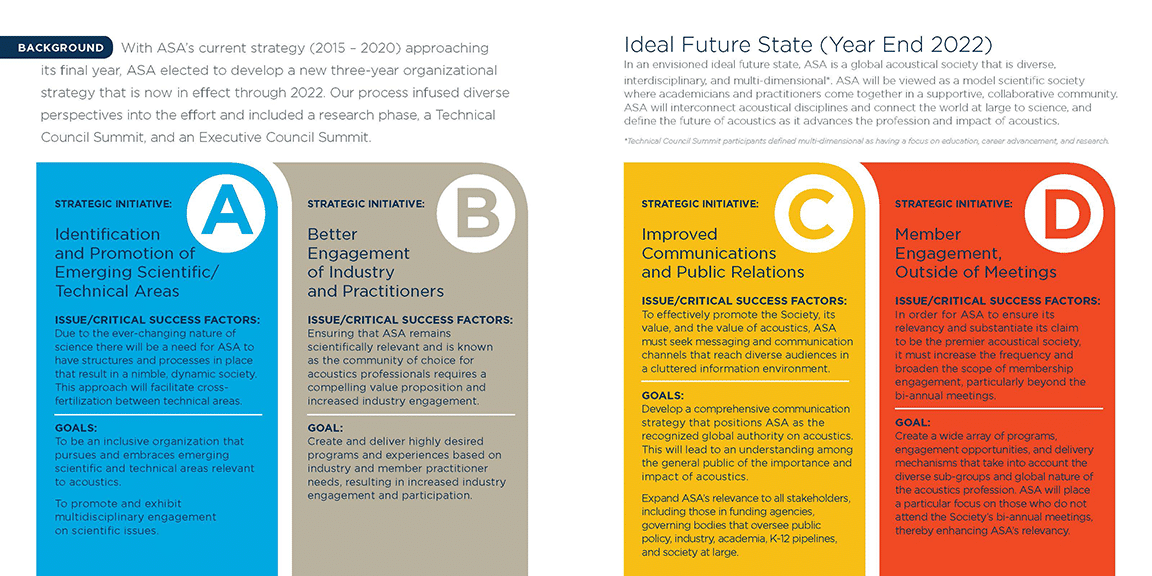 Strategic Initiative A: Identification and Promotion of Emerging Scientific/Technical Areas

Strategic Initiative B: Better Engagement of Industry and Practitioners

With ASA’s current strategy (2015 – 2020) approaching its final year, ASA elected to embark on a process to develop a new three-year organizational strategy for the upcoming years through 2022. The process, designed to infuse diverse perspective into the effort, included a research phase and two strategy development summits.

Prior to conducting two strategy development summits, ASA conducted a series of 30 telephone interviews with key stakeholders from diverse backgrounds, employers, and career stages, all of whom are current ASA members. The core purpose of the interviews was to gather information on current and emerging issues and challenges impacting the acoustics field and the Acoustical Society of America (ASA). The interviews also solicited information related to interviewee perceptions of ASA, ASA capabilities, and roles ASA might undertake to address identified challenges. The interviews were conducted in September 2018.

ASA also surveyed, in October of 2018, ASA member and non-member acoustics professionals. The survey collected information on ASA membership value, ASA’s role, ASA’s image and respondent’s perception of ASA, challenges and issues facing ASA, and challenges and issues facing the acoustics profession. A total of 2,628 responses were collected, including 2,455 responses from members and 173 from non-members.

A 1.5-day, facilitator-led think tank was conducted. Fifty-nine people participated in the summit. Participants included ASA Technical Council and Executive Council members, other leaders in ASA from diverse backgrounds, employers and career stages, and ASA staff. Nelson Strategic Consulting facilitated the retreat. The objectives of the summit were to: create an envisioned ideal future state for ASA three years from now, develop a common understanding of the expected internal and external environments in which ASA will operate over the next three years, and identify potential strategic initiatives that might propel ASA to its ideal future state.

The Technical Council Summit was followed by a 5.5-hour Executive Council Summit. Twenty-four people participated in the summit. Participants included ASA Executive Council members and ASA staff. The objectives of the summit were: identify priority strategic initiatives, better understand the issue(s) the priority initiatives are expected to address and develop an understanding of success for each priority initiative.

The purpose of the Society is to generate, disseminate, and promote the knowledge and practical applications of acoustics.

In an envisioned ideal future state, ASA is a global acoustical society that is diverse, interdisciplinary, and multi-dimensional[1], and viewed as a model scientific society where academicians and practitioners join together in supportive, collaborative community. More than just interconnecting acoustical disciplines and connecting the world at large to science, however, ASA helps define the future of acoustics as it advances the profession and impact of acoustics.

The Society is respected and matters to governments and to the society at large; public and private sector decision makers and influencers look to ASA for its expertise.

ASA ignites the public’s passion for science through acoustics and improves their perception of science.

The Society’s position and image is driven by the fact that ASA is cutting edge in every aspect and houses the preeminent acoustics Journal: JASA.

Strategic Initiative A: Identification and Promotion of Emerging Scientific/Technical Areas

Ongoing scientific advances and innovation continually result in the birth of emergent scientific and technical areas. At the same time, effectively solving the complex challenges confronting society at large will require a multi-disciplinary approach.

This ever changing nature of science, coupled with the need for a multi-disciplinary approach, will challenge ASA’s relevancy and call into question ASA’s position as an inclusive, expert leader in the acoustics profession. As such, there will be a need for ASA to have structures and processes in place that result in a nimble, dynamic Society and facilitate cross fertilization between technical areas. Likewise, building an inclusive culture will be key to ensuring ASA’s relevancy and position as an expert leader.

To be an inclusive organization that pursues and embraces emerging scientific/technical areas relevant to Acoustics.

To promote and exhibit multi-disciplinary engagement on scientific issues.

Strategic Initiative B: Better Engagement of Industry and Practitioners

Ensuring that ASA remains scientifically relevant and is known to be the community of choice for acoustics professionals will require increased industry engagement. As such, ASA will need a compelling value proposition for industry professionals that is promoted in a manner that positively impacts industry’s perceptions of ASA. Industry engagement success, therefore, will be dependent on ASA having a comprehensive understanding of industry needs and barriers to participation. Likewise, a willingness to evolve ASA on the part of academician members will be a prerequisite.

Create and deliver highly desired programs and a multitude of experiences based on industry and practitioner member needs, resulting in increased industry engagement and participation.

ASA has a number of diverse stakeholder communities, all with unique needs. ASA also has a need to effectively communicate with these audiences and, therefore, must compete for mindshare in a cluttered information environment.

Recognizing these realties, in order to effectively promote the Society and its value, and the value of acoustics, ASA must seek messaging and communication channels that take into account the cluttered environment and diverse nature of its audiences.

Develop a comprehensive communication strategy that positions ASA as the recognized global authority on acoustics and results in the greater public understanding the importance and impact of acoustics.

Expand ASA’s relevancy to all stakeholders, including those in K-12 pipelines, funding agencies, governing bodies that oversee public policy, industry, academia and society at large.

The strength, impact, success and value of a membership society is largely dependent on its membership engagement level. Conversely, offering an array of valuable products, services and experiences that target an organization’s diverse membership makeup increases member engagement. However, engaging members can be especially challenging for organizations like ASA where the membership is comprised of various sub-communities that are culturally diverse and geographically dispersed.

In order for ASA to ensure its relevancy and substantiate its claim to be the premier acoustics society, there is a need to increase the frequency and broaden the scope of membership engagement, particularly beyond the bi-annual meetings. Increasing engagement along these lines will require ASA to gain a comprehensive understanding of the specific needs of ASA’s various sub-communities located throughout the world and develop a wider array of attractive engagement mechanisms. Likewise, furthering a diverse and inclusive culture will be critical.  Ensuring diversity, equity and inclusion around the ASA’s core purpose continues to be of high importance, and work in this area will be coordinated in conjunction with the new Member Engagement Committee.

Create a wide array of programs and engagement opportunities/delivery mechanisms that take into account the diverse sub-groups and global nature of the acoustics profession, with a particular focus on those who do not attend the society’s bi-annual meetings, thereby enhancing ASA’s relevancy.