ASA East and South East Asia Regional Chapter was established after the approval from the ASA Executive Council in November 2018. This is the  only current Regional Chapter of the Society outside America. A Charter Ceremony was held in the Regal Hong Kong Hotel on 11 April 2019. We are honored to have The Hon Mr Wong Kam Sing GBS, JP, Secretary for the Environment, The Hong Kong SAR Government, and The Hon Ir. Dr Lo Wai Kwok, Representative of the Engineering Functional Constituency of the Legislative Council in Hong Kong as our Guests of Honour on this special occasion. Also, we had over 70 delegates from other professional institutions (with some from Beijing, Shanghai and Tokyo), academia, Government departments. We also had 2 video clips from Lily Wang, ASA President, and Brigitte Schulte-Fortkamp, Chair of the ASA International Liaison Committee, for the ceremony. 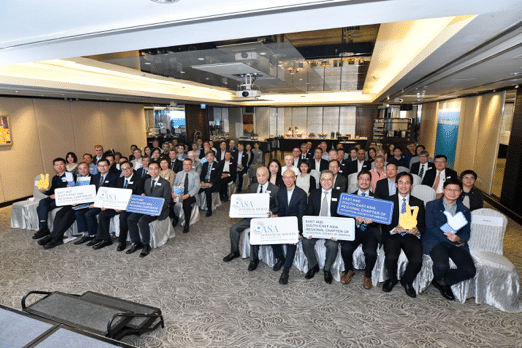 The scope of this Regional Chapter is to encumber the professional development in acoustics in East and South-East Asia.  Professionals in the acoustic field can extend their visions and networks so as to stimulate interest in acoustics, to encourage acoustical research, to diffuse the knowledge of acoustics, to promote its practical applications, and to provide an exchange forum on the many aspects of acoustics and related disciplines. The East and South-East Regional Chapter facilitates the enhancement of regional and international development, thereby promoting the acoustics profession while casting our visions to a higher plane.

This new Regional Chapter would serve as a platform and link for acoustic academics, researchers, practitioners in East and South-East Asia countries with other alike members in the ASA. Through hosting of technical seminars, regional conferences and delegation visits, there are ample of opportunities to provide communications between and amongst ASA members and those in East and South-East Asia countries; hence developing opportunity for collaborations.  No doubt, the establishment of this new Regional Chapter thus serves the purpose of fertilizing international collaborations and communication in all matters of acoustics; and more significantly, it will create the synergies needed for the initiatives. Hence, it is important to both ASA as well as the professionals in Asia countries.

According to the ASA Demographic Survey in 2018, there are 8.6% of ASA members (based on 7,000 membership) in Asia which is about 600. This translate into an opportunity to grow and reach out to non-Engineers. Therefore, one of the priority objectives of this new Regional Chapter is to the promotion of ASA and probably the expansion of membership size in East and South-East Asia.

We walked our talk, we have already lined up a number of activities to help meeting the objectives of setting up this new Regional Chapter. We kick-started our first activity on 5 April.  We joined hands with the National University of Singapore and the Macau Institute of Acoustics in organising a workshop on “Soundscape and Built Environment” in Singapore and it was well received. On 12 April, we attended a technical visit to Xiqu Centre of West Kowloon Cultural District which is a performance centre specially designed for Xiqu-Opera, arguably the first one in the world. Then, in the rest of 2019, we have already scheduled a number of visits to different cities in East and South-East Asia. As it stands, 2019 will be a busy year for this new Regional Chapter.

The founding chapter members are: