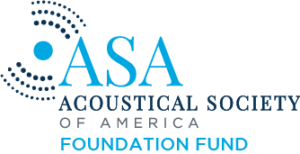 The Acoustical Society Foundation Fund supports ASA’s scholarships, grants, fellowships, and other special programs. ASA is grateful to its members and other contributors for their generous contributions. That support has enabled the ASA to provide assistance to thousands of acousticians in the pursuit of their research and education and thereby advance the field of acoustics.

Your contribution in support of new and existing initiatives will help ASA to fulfill its role in the world of acoustics and its mission to generate, disseminate, and promote the knowledge and practical applications of acoustics.

Click either tab to display details regarding giving opportunities to the Acoustical Society Foundation Fund.

A primary goal of the ASA Strategic Leadership Plan for the Future is to expand promotion and participation by early career members in academics, industry, government, and consulting. Recent activities toward achieving this goal included an Early-Career Acousticians held in conjunction with the spring 2016 ASA meeting in Salt Lake City, a newly-implemented Early Career Travel Award to support attendance by early career members at ASA meetings, and an initiative to broadcast ASA meeting content over the internet which can help early career members who cannot attend meetings to stay connected. To further support the next generation of scientists and dedicated leaders in acoustics and the ASA, a new fellowship program, ASA Early Career Leadership Fellows, has been developed.  Early career acousticians who are selected for these fellowships must show commitment to ASA and to new personal endeavors that will reward the Society and enhance their personal growth as future leaders at the same time.  The plan is to award two fellowships annually, each on the order of $6,000, to support activities that enhance the Fellows’ leadership skills and/or potential within their profession and within the ASA, as proposed by the applicants themselves. The Acoustical Society Foundation Board has accepted the challenge of the fundraising campaign to support these Fellowships – named the Campaign for ASA Early Career Leadership: Supporting the Next Generation of Leaders – with a goal to raise $300,000 between October 2017 and May 2019 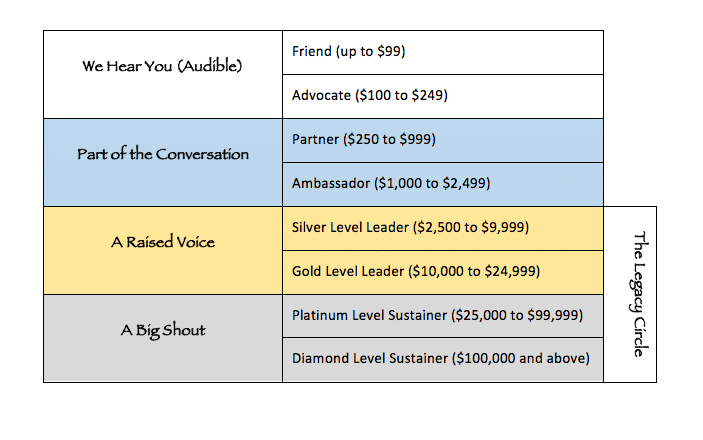 For more information, please refer to Vantage, A Report on the Acoustical Society Foundation in the fall 2021 issue of Acoustics Today

The Acoustical Society Foundation Board, a standing committee of the Society, assists the Executive Council in fundraising activities, makes recommendations of expenditures for awards and other initiatives, and interacts with prospective donors to the Society.  Current members of the Board are:

Click here for information about the various options for making donations to the Acoustical Society Foundation Fund.

Click here for information about The Acoustics Trust, a special group of ASA members and supporters who have agreed to provide for the Acoustical Society's philanthropic activities in their wills and estate plans.

Click here for information about scholarships, fellowships, and grants supported by the Acoustical Society Foundation Fund.

For information about the Acoustical Society Foundation Fund or for other information please contact asa@acousticalsociety.org.