1.1   Expand the promotion of ASA activities and resources through emerging media and online content

1.3   Improve the image of the ASA through a strategic branding initiative

Improve the image of the ASA through a strategic branding initiative

Host online educational materials on Explore Sound site as a participant in a proposal to NSF.

Working on guidelines through the Web Advisory Committee to standardize all 50 TC, SC and Admin websites.

Once completed websites will be updated and funds will be used.

Status: Funding not yet utilized but available once guidelines are determined  Action ongoing.

Background: A subcommittee will discuss possible ways that NPS and ASA can collaborate

Progress:  For various unanticipated reasons, no progress has been made but it is hoped that work on this action will proceed shortly.

role of other societies in MOOCs, continuing education

Michael Vorlander has requested ASA publicize his MOOC on Communication Acoustics.  This may be the proper response to identify andpromote acoustics MOOCs from universities.

Action #7: Recommend seed funding to the ICA (International Commission for Acoustics) to support their initiative to have 2019 declared an International Year of Sound.

Action #9: Determine how ASA can participate in the International Noise Awareness Day.

Background:  The International Noise Awareness Day occurs every April and is spearheaded by the Center of Hearing and Communication (CHC). This organization will be contacted to see how ASA can participate.

Background:   A recent study by Feibig et al. reported data collection through citizen participation of noise soundscapes across Germany. Brigitte Schulte-Fortkamp would like feedback on the model used, to define a methodology that can be provided to other countries.

Background:  YouTube is being used for education and outreach purposes. Is there a role for the Acoustical Society?

Background: Most of our efforts address the general public. It is not clear how to promote acoustics to government agencies. Plan to approach AIP to see if they can provide guidance.

Action #13: Host online educational materials on Explore Sound site as a participant in a proposal to NSF.

Andy Piacsek is preparing an NSF-ITEST proposal to create a musical acoustics course online that would be part of the ?Virtual School. He wishes to include ASA as a partner in this application. ASA would host the resulting education material on its Explore Sound website. There would be no direct funds involved.

Background: AIP has a fund of $100,000 pre annum for outreach in member societies

Progress: David proposed a $23,850 project for hands-on outreach to students from grades 3-9 at the New Orleans meeting 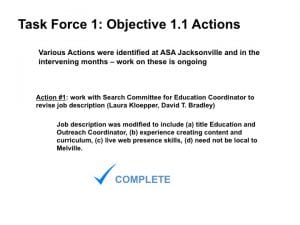 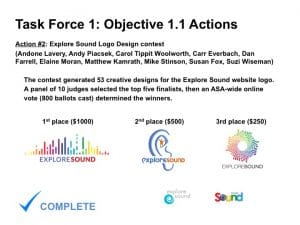 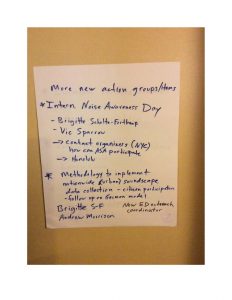 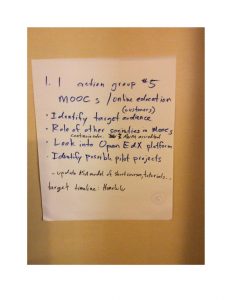 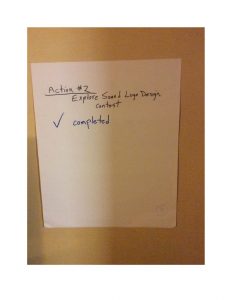 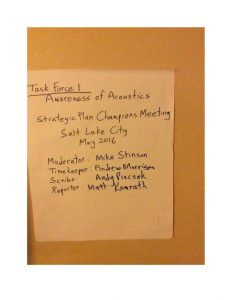 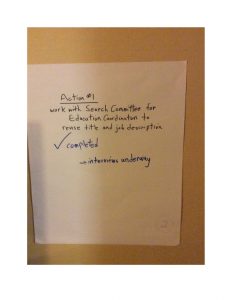 1.1   Expand the promotion of ASA activities and resources through emerging media and online content

1.3   Improve the image of the ASA through a strategic branding initiative

Want job description to include (a) title Education and Outreach Coordinator, (b) experience creating content and curriculum, (c) live web presence skills, (d) need not be local to Melville.

When: end of year

Dan Farrell is doing a great job but is in high demand. To avoid delays in implementation of online strategies, recommend web developer assistant be contracted.

Metrics: proposal of a plan of action

There was no support at the table for this idea.

ASA membership reflects societal diversity and the evolving multidisciplinarity of acoustics, ensuring its continued relevance to academics, industry, government, and practitioners across the globe and engaging acousticians throughout their entire careers.

Dissemination of Information and Knowledge ASA disseminates acoustics information and knowledge to a broad audience using the most effective means. PRIORITY OBJECTIVE. Streamline and upgrade author, reader, editor, and reviewer experience in all publications processes

ASA engages in wise, strategic stewardship to ensure sufficient resources to deliver maximum value both now and in the future. PRIORITY OBJECTIVE. Develop and implement a new business model, including the ASA Foundation Fund