Expert Brian FG Katz from the Lutheries-Acoustique-Musique Group at the Institute d’Alembert, Sorbonne Université, CNRS, in Paris is available to answer questions about reconstructing the complex acoustics of Notre Dame. 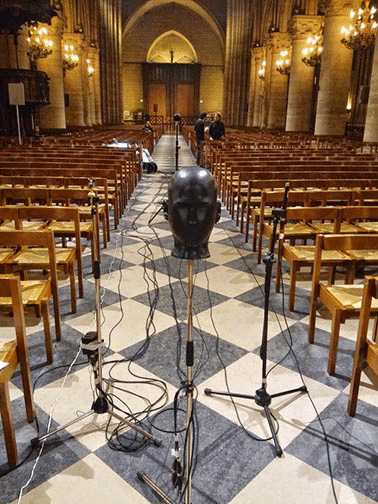 WASHINGTON, D.C., May 3, 2019 — The April 15 fire that devastated the roof of the 850-year-old Notre Dame de Paris Cathedral left many people around the globe wondering whether it’s possible to rebuild it in a way that can recreate the cultural icon’s complex signature acoustics.

Other cathedrals may seem to have similar acoustics, but no two are the same in the way sound soars and reverberates inside. Myriad nuances and details are unique — many of which are likely to change during the course of centuries as furnishings and renovations evolve.

Six years ago, on April 24, 2013, Brian FG Katz, a Fellow of the Acoustical Society of America and CNRS research director at Sorbonne Université, and colleagues obtained detailed measurements of the acoustics of the main space within Notre Dame.

These measurements hold new significance now, Katz said. They document the acoustic conditions of the cathedral before the fire and can be used during its restoration. He is available to answer questions from reporters about the work and reconstructing the complex acoustics of Notre Dame.

“The acoustics of worship spaces has long been a topic of interest and is an active area of study right now,” said Katz. “Acoustics within churches and places of worship, in general, vary greatly with the associated religious practices. Some emphasize the intelligibility of the spoken word, while others focus on the ritual aspects and musical nature. A grand church organ, for example, played within a dry room suited to speech can sound more like an accordion — without the reverberation mixing effect of the acoustics.”

How they captured the acoustics of Notre Dame

“The basic practice of measuring the acoustics of rooms is common across spaces,” Katz said. “We don’t use any special cathedral protocols. But for the long reverberation time and the considerable volume, we had to work to get our signal-to-noise level to an adequate level.”

Measurements were made using a collection of omnidirectional, 3D (first order ambisonic), and dummy head (binaural) microphones. Several dodecahedron loudspeakers were situated at key positions inside the cathedral, representing either typical source positions or those measurement positions of a series of measurements carried out by the same lab in 1987.

The researchers use mostly pro-audio hardware because it often provides a better signal-to-noise ratio and the installation is easier than laboratory measurement equipment.

“Technically speaking, we used a 20-second exponential sweep-sine signal, or chip, and deconvolution to obtain the room impulse response. This response, or the acoustic signature, for each source/receiver pair in effect characterizes how the room transforms the sound from source to receiver,” Katz said. “Once set up, the measurements took a little more than one hour and mostly involved moving microphones around.”

Getting access to iconic sites like Notre Dame is always difficult, and the time inside to record measurements always goes by fast. “One advantage of such a space is the relatively flat floor, which allowed us to have the majority of our equipment on a cart that can be rolled down the aisle,” Katz said. “This is in stark contrast to when we do measurements within concert halls with different levels and balconies.”

With a 6-second reverberation time at mid-frequencies, Katz describes Notre Dame’s sound as being “as full as you can imagine, with the reverberant energy coming from all around. As you move within the space, the acoustics varies due to changes in ceiling height, for example. This is very noticeable and can be heard on our online simulation example as you travel around the cathedral.”

From the measurements and other documentation they were able to obtain at Notre Dame, Katz and colleagues created a geometrical acoustic room model and calibrated it to the measured responses’ acoustic parameters using CATT-Acoustics (http://www.catt.se), a numerical simulation software used by acoustic consultants. That work was published in JASA in 2016 (see https://asa.scitation.org/doi/10.1121/1.4971422).

“Using this model, we simulated new room impulse responses that correspond to an orchestra configuration of a close-mic recording session made within the cathedral by the Conservatoire National Supérieur de Musique et de Danse de Paris (CNSMDP), a college of music and dance,” Katz explained. “By feeding these recordings to the appropriate source positions in the model, we were able to recreate the acoustic performance of this concert — allowing the listener to move within the cathedral to explore and experience the complex acoustics of this large and historic space.” They described this work in JASA in 2017 (see https://asa.scitation.org/doi/abs/10.1121/1.4987161).

For these simulations, “the sheer size and long reverberation time of the cathedral means longer calculation times, longer impulse responses, longer processing times, and more computational requirements,” Katz added. “These demands were far beyond what we experienced with other sites, and small fluctuations in air temperature resulted in misalignment of impulse responses. This, in turn, resulted in artificially reduced reverberation times for averaged measurements, so we developed a method to correct for it that can also be used as a way to measure small changes in mean temperature” — work published in 2016 (see https://asa.scitation.org/doi/10.1121/1.4955006).

Play it forward: The reconstruction of Notre Dame

How can Katz’s acoustic measurements help with the reconstruction of Notre Dame Cathedral? First, the existence of acoustic documentation of the cathedral is a huge benefit.

“It can help during renovation works when considering how the impact of any choices might change the acoustics, such as choice of materials,” Katz said. “It’s not clear yet what state the interior finishes are in, but the wooden panels and paintings within the cathedral are not at all insignificant when it comes to acoustics. Compared to the raw stone structure, these small elements act as possible acoustic absorption and diffusion and can have significant impacts on the resulting acoustics.”

The second benefit is virtual reconstruction — essentially providing a way for people to listen to performances within the “lost” acoustics. “This could be via working with the CNSMDP to process the full recording of the concert we presented an excerpt of on YouTube, or to process other recordings made using the same procedure. This approach can also be used to listen to ‘new’ performances within the cathedral that never occurred there — enabling even live performances to be broadcast as a concert within the virtual Notre Dame. These could be of interest during the reconstruction, while the building is inaccessible to the public.”

Acentech staff recognized by the Institute of Noise Control Engineering

Acentech is pleased to announce that two staff members were recognized at the most recent Institute of Noise Control Engineering (INCE-USA) winter board meeting.

Acentech Principal Consultant Eric Wood was elected Fellow of the Institute by the INCE Board of Directors. (The designation of Fellow is awarded to INCE members that have made notable contributions to the Institute and the field of noise control engineering.) Eric has provided exceptional consulting in this area for over fifty years. He has served in multiple executive roles at INCE-USA including President from 2012 to 2014. He is currently the President of the INCE Foundation, a position he has held since 2009.  Eric also serves on the advisory board and is the proceedings editor for the Technology for Quieter America (TQA) Program. Eric began his career at Pratt & Whitney Aircraft in 1967 and moved to Bolt Beranek and Newman (BBN) in 1972. Eric is one of the founders of the current incarnation of Acentech, which secured its independence from BBN in 1991. During his half century of consulting, he has applied his skills to hundreds of industrial and environmental noise projects, authored numerous industry reference manuals, and has published and presented papers to leading industry associations. 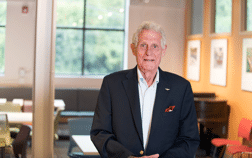 At the same INCE-USA Board Meeting, Acentech Principal Consultant Michael Bahtiarian was elected by the board of directors to become INCE’s Executive Vice President/President-Elect.

Michael will become the INCE President at the conclusion of the winter board meeting in January 2020, and will then serve two years as President. Until then, he serves as an Executive Vice President. 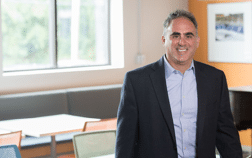 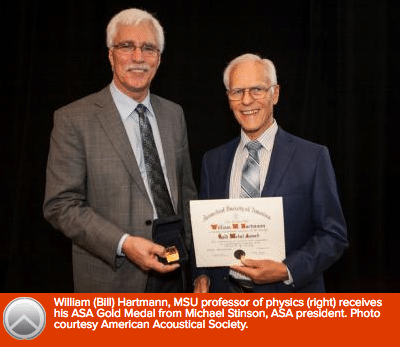