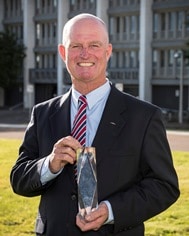 Dr Brian Ferguson is the Principal Scientist (Acoustic Systems) at Maritime Division Sydney, Defence Science and Technology Group. He is a Fellow of the Institution of Engineers Australia and a Fellow of the Acoustical Society of America.

In 2016, he was the recipient of the Defence Minister’s Award for Achievement in DefenceScience, which is the Australian Department of Defence’shighest honour for a defence scientist and recognises original and outstanding contributions capable of enhancing Australia’s defence effectiveness and efficiency.

In November 2015, he became the first non-American to receive the Acoustical Society of America’s prestigious Silver Medal for Signal Processing in Acoustics.

In August 2017, he was awarded the Department of DefenceSecretary Commendation for exemplary performance and leadership in the fields of underwater and atmospheric acoustics, passive and active sonar signal processing and analysis.